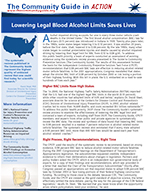 Alcohol-impaired driving accounts for one in every three motor vehicle crash deaths in the United States.1 The first blood alcohol concentration (BAC) law for drivers (0.15 percent) was introduced in Indiana in 1939. Twenty plus years later, in the 1960s, some states began lowering it to 0.10 percent. It was another 20 years, before the first state, Utah, lowered it to 0.08 percent. By the late 1990s, many other states began to combat preventable injuries and deaths caused by alcohol-impaired driving by lowering their legal limit for BAC from 0.10 to 0.08 g/dL. To address this public health priority, a team of experts conducted an assessment of existing evidence using the systematic review process presented in The Guide to Community Preventive Services (The Community Guide). The results of this assessment formed the basis for the independent Community Preventive Services Task Force (Task Force) recommendation that 0.08 percent BAC laws are effective in reducing alcohol-related motor vehicle fatalities. In the 2001 appropriations, Congress mandated that states adopt the stricter BAC limit of 0.08 percent by October 2003 or risk losing a portion of their highway funding. With this bill in place, the U.S. embarked on a road to save hundreds of lives each year.2

“In 2000, the National Highway Traffic Safety Administration (NHTSA) reported that the U.S. had one of the highest legal BAC limits in the world (0.10 percent), while other countries had adopted limits of 0.05 and below,” explains Dr. David Sleet, associate director for science at the Centers for Disease Control and Prevention’s (CDC) Division of Unintentional Injury Prevention (DUIP). In 2002, alcohol-related crashes led to more than 16,600 deaths, and costs exceeded $51 billion nationwide.3,4 To address this public health priority, DUIP chose The Community Guide’s systematic review process to examine the effectiveness of lowering the BAC legal limit and convened a team of experts, including staff from DUIP, The Community Guide, Task Force members, and experts from other public and private agencies to systematically review the BAC data. The review and synthesis of data found that lowering BAC limits to 0.08 percent resulted in a median 7 percent reduction in alcohol-related motor vehicle fatalities. The systematic reviews also estimated that if every state adopted a 0.08 percent BAC limit, more than 400-500 lives would be saved each year from alcohol-related crashes.5

The Task Force used the results of the systematic review to recommend, based on strong evidence, 0.08 percent BAC laws to reduce alcohol-related motor vehicle fatalities. During the 2001 Congressional hearings on the Department of Transportation’s Appropriations legislation, the subcommittee requested credible, independent evidence to inform their deliberations about changes in legislation. Partners and policy makers asked the Task Force, which is an independent non-governmental body of experts, for a copy of their findings and recommendations, which was provided in a letter that reached the Chair of the Transportation Subcommittee.6 Shortly after, Congress passed an appropriations act that required states to adopt 0.08 percent BAC laws by October 2003 or face losing portions of their federal highway construction funding. “According to those close to the debate, because CDC, The Community Guide, and the Task Force are viewed as the gold standard of objective science, the letter effectively settled the data debate, paving the way for the passage of the 0.08 federal legislation,” recalls Dr. Sleet. “We learned that you never know when the opportunity arises where policymakers need your evidence,” he said.

The new bill and federal funding policies provided incentives for states to enact 0.08 percent BAC laws. DUIP developed and implemented, with NHTSA’s assistance, a dissemination plan to raise awareness of the new legislation and related motor vehicle reviews from The Community Guide. Disseminating results through partners, decision makers, associations, and media helped transform the research into practice. Key leaders at NHTSA, Mothers Against Drunk Driving, the Society for Public Health Education, the American College of Preventive Medicine, and others were instrumental in reaching media, colleagues, and decision makers at state and local levels about systematic review results, Task Force recommendations, and general information on The Community Guide. “In order to advocate effectively for lifesaving legislation, advocates must have clear and compelling scientific evidence to provide a basis for policy change,” says Millie Webb, former national president of Mothers Against Drunk Driving.