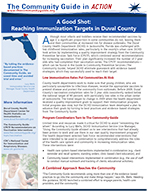 The Duval County Health Department in Jacksonville, Florida was challenged with low childhood immunization rates, particularly in its urban core. By implementing a quality improvement strategy that combined multiple Community Guide recommendations, they reached the national target within one year. (Released 2012)
View PDF

Although most infants and toddlers receive their recommended vaccines by age 2, a significant proportion in some communities do not, leaving them and their communities at increased risk for disease outbreaks. The Duval County Health Department (DCHD) in Jacksonville, Florida was challenged with low childhood immunization rates, particularly in the county’s urban core. DCHD took action by implementing a quality improvement strategy from the Community Preventive Services Task Force (Task Force), which combined several recommendations for increasing vaccination. Their plan significantly increased the number of 2-year-olds who had completed their vaccination series. The Task Force recommendations which can be found in the Guide to Community Preventive Services (Community Guide), helped DCHD eliminate guesswork with evidence-based strategies, which they successfully used to reach their target.

County health departments work to make sure that young children, who are particularly susceptible to infectious diseases, receive the appropriate vaccines to prevent disease and protect the community from outbreaks. Before 2009, Duval County’s vaccination completion rates for 2-year-olds consistently ranked below the national target of 90 percent, with particularly low rates in the urban center of Jacksonville. The trend began to change in 2009 when the health department received a quality improvement grant to support their immunization program. Initial progress was slow, but the DCHD immunization team developed a plan to advance their goals by turning to best practices and evidence-based strategies from the Community Guide.

Limited time and resources made it critical for DCHD to avoid “reinventing the wheel.” According to Lucy Wells, DCHD Immunization Service Line Manager, “Using the Community Guide allowed us to see interventions that had already been proven to work and use them in our own quality improvement program.” The health department selected Task Force-recommended interventions that were intended to be used in combination to comprehensively address the roles of the health care system and community in increasing immunization rates. These interventions were:

A Combined Approach Reaches the Community

“The Community Guide recommends using more than one of the evidence-based practices to go into the community and make things happen,” says Ms. Wells. Heeding this guidance, DCHD launched a combined effort to engage parents, health care providers, and the community.

Within one year, the percentage of 2-year-olds with complete immunization records rose from 75 to 90 percent, hitting the national target. One clinic in particular, which had the worst immunization rates of all the Duval County clinics, made remarkable progress, increasing from 74 to 92 percent in 18 months. Now that the target has been reached, DCHD has set their sights on raising the immunization rate to 95 percent by increasing the number of client reminders to 2 to 3 per month and engaging more community partners.

“We are trying to reach out to as many community health partners as we can,” says Ms. Wells. “As the health department, we can provide the vaccines and training if our partners can provide outreach to the community. Now that we have a model that is working, we really want to focus on the outreach piece.”