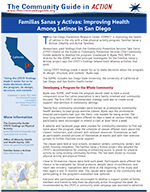 The San Diego Prevention Research Center is improving the health of Latinos in the city with a free physical activity program. Weekly exercise classes are held throughout the community. (Released 2015)
View PDF

The San Diego Prevention Research Center (SDPRC)* is improving the health of Latinos in the city with a free physical activity program, Familias Sanas y Activas (Healthy and Active Families).

“Using Task Force findings made it easier for us to make decisions about the program, its design, structure, and content,” Ayala says.

Developing a Program for the Whole Community

Ayala says SDPRC staff knew the program would need to have a social component since the Latino population is very family-oriented and community focused. The first Task Force recommended strategy used was to create social support interventions in community settings.

A website and Facebook page were created for community members to find out more about the program, view the schedule of classes offered, learn about the classes’ instructors, and connect with relevant resources. Promotoras as well as participants posted pictures of themselves at events and with their exercise groups to further illustrate social support.

The classes were held at local schools, recreation centers, community centers, and public housing complexes. The Familias Sanas y Activas project also adopted the Task Force’s recommendation for creating or enhancing access to places for physical activity by using existing community facilities. This has been shown to increase physical activity and physical fitness.

Close to 50 exercise classes were held each week. Participants were offered the chance to be evaluated for: blood pressure, weight, waist circumference, and heart rate recovery. Evaluations were done at the beginning of the study and then again 6 and 12 months later. The classes were open to the community and participating in the program’s evaluation was optional.

Everyone who participated was encouraged to develop a support system of family members and friends to help them be physically active throughout the week. As recommended by the Task Force, a community-wide campaign was launched to advertise the program and physical activity opportunities. Presentations were given at schools, community health fairs, and other community events.

The Task Force’s recommendation for individually-adapted health behavior change programs helped the SDPRC staff understand the importance of basic behavior change skills, such as goal setting and self-monitoring. An optional, 11-session healthy lifestyle program was offered in addition to the regular exercise classes. Self-esteem, weight control, and healthy eating were a few of the topics covered in that program.

Obesity is a risk factor for heart disease, which is the second leading cause of death among Latinos.1 Programs like Familias Sanas y Activas can help prevent and control obesity among this population.

*In 1984, Congress authorized the U.S. Department of Health and Human Services (HHS) to create a network of academic health centers to conduct practical public health research. The Centers for Disease Control and Prevention (CDC) was selected to provide leadership, technical assistance, and oversight for this network, which is called the Prevention Research Centers (PRC) Program. Each center conducts at least one core research project with an underserved population that has high rates of disease and disability. SDPRC is a formerly-funded PRC.