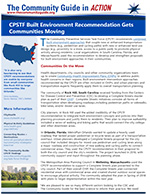 National and local organizations used the CPSTF recommendation for combined built environment approaches to promote physical activity among Americans. Creating ways for people to move more has immediate and long-term health benefits. Both small and large communities developed and strengthened plans to improve built environment approaches for their residents such as transportation systems, bike paths and parks. CityHealth, a project of The de Beaumont Foundation and Kaiser Permanente, included built environment initiatives as part of their recommended public health policies to improve public health in cities. (Released 2019)

The Community Preventive Services Task Force (CPSTF) recommends combined built environment approaches that couple new or enhanced transportation systems (e.g., pedestrian and cycling paths) with new or enhanced land use design (e.g., proximity to a store, access to a public park) to promote physical activity among residents. Local organizations in South Carolina, Florida, and Massachusetts used this recommendation to develop and strengthen proposals for built environment approaches in their communities.

Communities On the Move

The community of Rock Hill, South Carolina received funding from the Centers for Disease Control and Prevention (CDC) to develop a Complete Streets master plan as part of their CHIP.* Complete Streets initiatives consider all forms of transportation when developing roadways, including pedestrian paths or sidewalks, bike lanes, and/or mixed-use lanes.

City planners in Rock Hill used the added credibility of the CPSTF recommendation to integrate built environment concepts and policies into their planning processes and justify them to residents. Their plan to improve walkability included a series of walking and biking paths that would connect the city college and other downtown areas.

In Orlando, Florida, MetroPlan Orlando wanted to update a heavily used roadway that lacked proper pedestrian or bicycle lanes as part of a transportation overhaul. Urban planners developed a Complete Streets proposal for the city council that included designs for mixed-use pedestrian and cycling lanes along a major roadway and construction of new walking and cycling paths to connect commercial areas. They used the CPSTF recommendation in their proposal to both the city council and the city’s residents. The project launched in 2016, with community support and input throughout the planning phase.

The Metropolitan Area Planning Council in Wellesley, Massachusetts used the CPSTF recommendation to support a Complete Streets plan presented to the city council. Part of their overall CHIP, the Complete Streets plan connected residential areas with commercial areas and created shared outdoor social spaces to encourage physical activity. The community adopted the plan in Spring of 2018 with plans to begin implementation within the next year.

“We are pleased to see so many different sectors looking to the CDC and The Community Guide for the best science to inform their practice. We need professionals from other sectors such as community planners, transportation engineers, ped-bike professionals, and parks and recreation staff to collaborate with public health and clinical professionals to help all Americans achieve levels of physical activity recommended in the Physical Activity Guidelines for Americans, 2nd edition,” said Chris Kochtitzky, senior advisor with the Physical Activity Translation and Evaluation Team in CDC’s Division of Nutrition, Physical Activity, and Obesity (DNPAO). “It is also very heartening to see that CPSTF recommendations are usable by everyone from small communities like Rock Hill to large communities like Orlando.”

The Right Information at the Right Time

The Community Guide partnered with DNPAO to disseminate information about the built environment recommendation to a wide range of audiences, including non-traditional public health partners, such as urban planning professionals and architects. Scientists delivered presentations at national meetings and through free webinars, and organizations referred to the recommendation in their materials.

DNPAO used the CPSTF recommendation to develop Connecting Routes + Destinations a set of resources and guidelines designed to help public health professionals and community leaders promote and increase physical activity in their communities by supporting activity-friendly connections, such as safe crossings from neighborhoods to schools.

CityHealth, project of The de Beaumont Foundation and Kaiser Permanente, was developed to strengthen and protect governmental public health policies. CityHealth rates the 40 largest cities in the United States based on their use of selected public health policies, including Complete Streets policies that incorporate the CPSTF recommendation for combined built environment approaches.

According to the CityHealth website, “Complete Streets policies balance people’s needs and safety across all forms of transportation, including walking, biking, public transit and cars. From street lighting to bike lanes to crosswalks, these policies ensure that all residents have safe, convenient ways of getting around and staying active regardless of their age or ability.”

*Funding was awarded by CDC’s Division of Community Health which has since merged with the Division of Nutrition, Physical Activity, and Obesity (DNPAO).