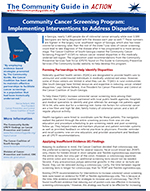 The Cancer Coalition of South Georgia used recommendations from The Community Guide to reduce cancer-related disparities in a largely rural, medically underserved region in the state. The Community Cancer Screening Program started as a pilot program and now serves more than 25 counties in southern Georgia. (Released 2015)
View PDF

In Georgia, nearly 1,400 people die of colorectal cancer annually while over 3,500 Georgians are being diagnosed with the disease each year as well.1, 2 These numbers are highest in the largely rural, southwest region of Georgia, which also has lower colorectal screening rates than the rest of the state.3 Low rates of cancer screening could lead to late diagnosis of the disease after it has progressed to a more serious stage. The Cancer Coalition of South Georgia created the Community Cancer Screening ProgramTM (CCSP) to reduce cancer-related disparities in this medically underserved region. The organization used recommendations from the Community Preventive Services Task Force (Task Force) found on The Guide to Community Preventive Services (The Community Guide) website, to help develop this program.

Federally-qualified health centers (FQHCs) are designated to provide health care to uninsured and underinsured individuals in medically underserved areas. However, some of those centers are limited in what they can do. “FQHCs in rural communities [like South Georgia] have limited resources and expertise in reducing cancer-related disparities,” says Denise Ballard, Vice President for Cancer Prevention and Control at the Cancer Coalition of South Georgia.

To help these FQHCs increase colorectal cancer screening tests among their patients, the Cancer Coalition partnered with local public health agencies, hospitals and medical specialists to identify and give referrals for average-risk patients aged 50 to 64, who were due for a screening test. Some risk factors for colorectal cancer are a low fiber and high-fat diet, family history of colorectal cancer, and a lack of regular physical activity.

Health navigators were hired to coordinate care for these patients. The navigators walked the patient through the entire screening process from one-on-one education and procedure scheduling to pre-screening needs and post-screening follow up. They helped create and maintain physician and patient reminder systems as well as provided feedback on referral practices to physicians. Provider reminder and recall systems, one-on-one education, and provider assessment and feedback are all Task Force recommendations.

Keeping its audience in mind, the Cancer Coalition decided that colonoscopy was the preferred screening method for several reasons. Fecal occult blood test (FOBT) only checks for hidden blood in stool samples and flexible sigmoidoscopy examines the entire rectum, but only part of the colon. However, a colonoscopy examines the entire colon and rectum, so additional screening tests would not be needed. Second, if any precancerous polyps (abnormal growths in the colon or rectum) are found, they can be removed during a colonoscopy. Lastly, the time between regular screening tests is longer for colonoscopy than for FOBT and flexible sigmoidoscopy.

Existing Task Force recommendations for interventions to increase colorectal cancer screening tests were based on evidence for FOBT or flexible sigmoidoscopy only. This is because at the time, little evidence existed for strategies to increase use of colonoscopy. The Task Force found insufficient evidence that reducing out-of-pocket costs was effective in increasing screening colonoscopies.* However, this strategy was found to be effective for increasing breast cancer screenings, so the Cancer Coalition decided to use it to reduce cost barriers for patients. The intervention covered the colonoscopy and all costs associated with it, which included the bowel cleansing solution that had to be taken before the procedure and if needed, transportation to and from the appointment. Also, the medical centers where the colonoscopies were given waived their facility access fees to further reduce cost barriers.

The Cancer Coalition’s cancer screening program began as a pilot project in Baker County, Georgia that included screening tests for breast, cervical, colorectal, and prostate cancers. The success of the program prompted its expansion to 12 primary care clinics, serving more than 25 counties in South Georgia. In 2012, the Emory University Prevention Research Center conducted an outcome evaluation of the colonoscopy component of the CCSP. Ms. Ballard says the evaluation was meant to not only determine the success of that part of the program, but also to contribute to the evidence available regarding colonoscopy screening promotion strategies.

Results from the evaluation showed that of all the patients due for a colorectal screening test, 35% of those at the intervention clinics received a colonoscopy examination compared to only 7% of patients at non-participating clinics. The U.S. Preventive Services Task Force (USPSTF) recommends that colonoscopies be performed every 10 years, FOBT should be done once a year, and flexible sigmoidoscopy should be done every 5 years with an FOBT every 3 years. Forty-three percent of patients at the intervention clinics were likely to be compliant with these guidelines compared to only 11% of patients at nonparticipating clinics.

In 2013, the Cancer Coalition was one of three recipients of the Mutual America Foundation’s National Community Partnership Award, which recognized the Coalition’s work in reducing cancer screening disparities through community partnerships. “By employing evidence-based strategies promoted by The Community Guide, the Cancer Coalition has been able to maintain effective partnerships to facilitate cancer screenings in a population that had been historically underserved,” says Ms. Ballard.

Since its beginning, the CCSP has provided no-cost breast, cervical, and colorectal cancer screening services to more than 4,000 patients. More than 800 uninsured and underinsured patients receive screening tests each year. The program is funded through state and federal resources including the Centers for Disease Control and Prevention, individual and corporate donations, and in-kind donations from health care partners.

*Insufficient evidence does not mean the intervention does not work. It means not enough research is currently available or the results of existing research are too inconsistent to make a firm conclusion about the intervention strategy’s effectiveness.

The Cancer Coalition of South Georgia