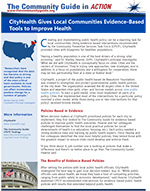 “Having a healthy population is one of the best drivers of a strong, vital economy,” said Shelley Hearne, DrPH, President of CityHealth. “What we did with CityHealth is conceptually focus on cities. Cities are the centers of innovation. They’re trying new approaches, new strategies, and in addition to a focus on populations and a willingness for cooperation, there may be less partisanship than at a state or federal level.”

CityHealth, an initiative of the de Beaumont Foundation and Kaiser Permanente, provides leaders with a package of evidence-based policy solutions that will help millions of people live longer, better lives in vibrant, prosperous communities. CityHealth initially assessed the 40 largest cities in the United States and awarded cities gold, silver, and bronze medals across nine public health policies. To earn a gold medal, cities must implement all parts of a policy. Cities that implemented most of the interventions for a particular policy received a silver medal, while those doing one or two interventions for that policy1 received bronze medals.

Policies Based in Evidence

When decision makers at CityHealth prioritized policies for each city to implement, they first looked to The Community Guide for evidence-based policies to improve public health outcomes. Hearne and her colleagues challenged themselves to find the most practical policies for social determinants of health (i.e. education, housing, etc.). Each policy needed a strong evidence base and backing by public health experts. Once Hearne and her colleagues identified the nine most helpful policies, they tested those with the greatest impact to ensure cities could develop and enforce them.

“If you think about it, job number one is looking at policies that make a difference, and there’s no better place to go than The Community Guide,” Hearne said.

The Benefits of Evidence-Based Policies

“We started to see the evidence base linking crime issues and public safety issues,” Hearne said. “It was a challenge to get city leaders to understand the connection between public health and crime. If The Community Guide hadn’t provided that research, we would not have been able to include these policies in our program.”

CityHealth has worked with selected cities to help implement and enforce the nine priority policies within their communities. In addition to the bronze, silver, and gold medal awards for each policy, CityHealth also rewards cities who achieve gold status. To receive this distinction, cities must have five or more gold medals across the nine policies. Currently, five cities have earned gold status, five have mostly silver medals, and nine cities have mostly bronze medals.

“Our ideal goal is that all 40 cities get to gold,” Hearne said. “We are now following up with technical assistance and support to cities that want to improve their status, that want to implement these nine policies.”

CityHealth awards these medals to recognize and motivate cities to implement and maintain evidence-based public health policies. Having a gold status from CityHealth can be a source of pride for cities and encourage public health officials in other cities to follow suit.