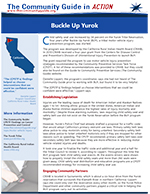 The California Rural Indian Health Board received a grant from CDC to develop a motor vehicle injury prevention program for the Yurok Tribe in California. The reservation saw increased child safety seat use each year after the program began. (Released 2015)
View PDF

The program was developed by the California Rural Indian Health Board (CRIHB). In 2010 CRIHB received a four-year grant from the Centers for Disease Control and Prevention’s Division of Unintentional Injury Prevention to launch BUY.

Danielle Lippert, the program’s coordinator, says she had not heard of The Community Guide prior to working with BUY, but found it to be very helpful.

“The [Task Force’s] findings helped us choose interventions that we could be confident were effective,” Lippert says.

Injuries are the leading cause of death for American Indian and Alaskan Natives ages 1 to 54.1 Among ethnic groups in the United States, American Indian and Alaska Native children experience the highest rates of injury mortality and morbidity.2 Despite those alarming numbers, laws requiring child safety seat and safety belt use did not exist on the Yurok Reservation before the BUY program began.

It took one year to finalize the traffic code and additional year and a half for the Tribal Council to review it, according to Lippert. Throughout this time the BUY program held child safety seat events. At the events drivers were shown how to properly install the child safety seats and more than 260 seats were given away. Child safety seat distribution and education programs are a Task Force recommended strategy for increasing child safety seat use.

CRIHB is located in Sacramento, which is about a six-hour drive from the Yurok reservation that surrounds the Klamath River in northern California. Lippert says she could only visit the reservation every other month, so the Yurok Police Department and other community partners played a critical role in helping the BUY program carry out its activities.

“The Yurok Police Department has worked closely with CRIHB on this project, beginning with the planning of the proposal,” Lippert says. “The Yurok PD staff implemented many program activities and assisted with data collection locally.”

Also, the BUY program trained a group of teenagers to educate their peers on traffic safety habits. This group, named the BUY Teen Coalition, developed presentations that were given at local schools and community events. Topics discussed in the presentations included teen traffic safety, proper occupant restraint use, graduated drivers licensing, and the effects of alcohol on a developing brain.

In October 2012 the Tribal Council approved the traffic code. The traffic code does not require officers to issue citations for lack of restraint use. It is at their discretion to issue a citation or just give a warning. Yurok police officers that were involved in the BUY program held enforcement check points, which helped Lippert observe safety belt and child safety seat use.

The enforcement checkpoints and other BUY activities were advertised on the program’s Facebook page as well as featured in local newspapers and promoted on the local radio station. Community-wide information and enhanced enforcement campaigns are also a Task Force recommended strategy for increasing child safety seat use. Lippert says the program worked with the Yurok Tribal Court to develop an hour-long class that covered the basics of child passenger safety.

“Once the vehicle code had been passed, we knew we wanted to develop a child passenger safety education class that could be offered in lieu of paying a fine,” Lippert says.

Twenty-four Yurok Tribe employees have been certified as child passenger safety technicians, which Lippert believes will help create a culture of traffic safety in the community.

The BUY program ended in 2014. However, the Federal Highway Administration’s Tribal Transportation Program awarded the Yurok Tribe with funding to develop a tribal safety plan. Lippert says the plan will identify current community safety issues and ways to address those issues. The BUY program will serve as a foundation to build that plan.

The California Rural Indian Health Board