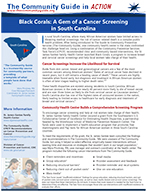 In rural South Carolina, where many African American women have limited access to lifesaving medical screenings, the risk of cancer-related death is a complex public health problem. After being introduced to The Guide to Community Preventive Services (The Community Guide), one community health center in the state confronted this challenge head on. Using a combination of the Community Preventive Services Task Force’s (Task Force) recommended clinic and community-based interventions, the St. James-Santee Family Health Center launched Black Corals, a program to increase breast and cervical cancer screenings and help local women take charge of their health.

Aside from skin cancer, breast and gynecological cancers are a few of the most common cancers among American women.1 Rates of cervical cancer have declined in recent years, but it still remains a leading cause of death.2 These cancers are highly treatable when found early, but diagnosis and treatment in African American women is often at later stages leading to higher death rates.3,4

These health disparities are evident among residents in South Carolina. African American women in the state are nearly 40 percent more likely to die of breast cancer, and are over three times as likely to die from cervical cancer as Caucasian women.5 South Carolina also has one of the highest rates of uninsured women in the nation, likely leading to limited access to healthcare for early diagnosis and treatment of breast and cervical cancers.5

To meet the requirements of the grant, the St. James-Santee team consulted the findings and recommendations in The Community Guide. “We were unaware of The Community Guide, but using it helped us select effective, empirically-based interventions without wasting time and resources on strategies that wouldn’t work in our target population,” says Myra Pinckney, RN, case manager and outreach coordinator at the health center. The program included the following cancer interventions from The Community Guide:

The health center packaged their program as the Black Corals project to engage the community and empower women to make personal health a priority. The program handed out black coral bracelets that included an insert with a positive message to African American women about self-worth and a reminder about breast and cervical cancer screening. Nurses and case managers traveled to local churches in the counties to hand out bracelets, lead workshops about risks and symptoms of breast and cervical cancers, and teach women about early detection.

An accompanying media campaign to spread the word about free exams available at the health center included posters at community events and flyers at hair salons. A local women’s church group spread the word through walks and cookouts about Black Corals and the health center’s screening programs. As more requests for screening appointments and education sessions came in, the health center worked with local restaurants and community partners to provide additional locations for educational workshops. The Medical University of South Carolina provided additional screening locations through its Hollings Cancer Center mobile mammography unit.

Community-Wide Behavior Change in the Wake of Black Corals

Within two years of putting Black Corals into action, the number of women at all four of the health center’s locations getting Pap tests increased by nearly 17 percent, mammograms increased by 15 percent, and the number of women who missed scheduled screening appointments dropped from 31 to 19 percent. Just as important, community involvement stayed strong with increased attendance at the educational workshops. “The results exceeded our initial expectations,” says Ms. Pinckney. “While reminder postcards were used, it was really the personal calls, flyers, education, and community enthusiasm that created a successful program.” The health center’s success prompted an invitation to join a local collaboration on cancer awareness and advocacy.

The St. James-Santee team now uses Black Corals as a model for other community-based programs. The health center has become a champion for The Community Guide and is using other Task Force findings and recommendations to push for new policies in their primary care and diabetes programs.

The Black Corals project won first place in the Public Health Foundation’s 2011 “I’m Your Community Guide!” contest, which highlighted groups that used Task Force findings and recommendations in The Community Guide to improve health in their communities.